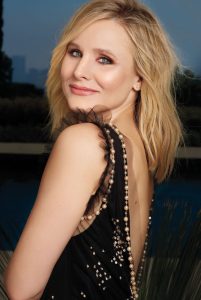 Kristen Bell in an American actress who began her career in stage productions. She attended the Tisch School of Arts in New York. She played Becky Thatcher in The Adventures of Tom Sawyer on Broadway in 2001, leaving New York University to do so. She also had a role in the Broadway revival of The Crucible. After this, in 2002, she moved to Los Angeles. In 2004, Bell began her role in Veronica Mars as the title character. She found parallels between her own life and her character Veronica’s life, and many critics believed she should have been considered for an Emmy Award for her performance.

Bell appeared as Elle Bishop on several episodes of Heroes, and also voiced the title character in Gossip Girl (both roles began in 2007). Over the next few years she had roles in many films as well as voicing a character, Lucy, in the Assassin’s Creed video game franchise. Bell starred in the family drama film Big Miracle in 2012. She also portrayed Mary Magdalene in The Truth & Life Dramatized Audio New Testament Bible, which is a dramatized audio adaptation of the New Testament. In 2012, Bell voiced Anna in the Disney film Frozen. In 2013, Bell reprised her role as Veronica in a crowd-funded Veronica Mars film.

Recently, Bell starred as Kiki in 2016 comedy film Bad Moms and has reprised that role for the sequel A Bad Moms Christmas, releasing later this year. She also stars as Eleanor Shellstrop in NBC comedy series The Good Place, which premiers its second season next week on September 20th.

Last year, Bell began publicly talking about her struggles with mental health. She wrote, “Depression gave me a complete and utter sense of isolation and loneliness. … I felt worthless, like I had nothing to offer, like I was a failure. Now, after seeking help, I can see that those thoughts, of course, couldn’t have been more wrong. It’s important for me to be candid about this so people in a similar situation can realize that they are not worthless and that they do have something to offer. We all do.”

Bell is often involved with philanthropic efforts and charities, and this past week she made the news and garnered interest on social media for her positive presence in Florida during Hurricane Irma. She performed Frozen songs for a group of evacuees at a shelter, helped Josh Gad’s family get a hotel room in safety, and visited with residents of a senior center at her hotel and played Bingo with them.

Pray with us this week for Kristen Bell. We ask God to bless her heart for people, her compassion and empathy, and her giving spirit. Pray that God will give her peace and comfort as she continues to heal from her depression, and that God will use her honesty in telling her story about depression to help bring comfort to others. We pray that in her ongoing and upcoming work, God will show her his unconditional love for her and show her who He truly is in her life.