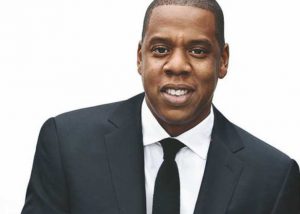 Shawn Corey Carter, born December 4, 1969, known professionally as JAY-Z (formerly stylized as  Jay Z and Jaÿ-Z), is an American rapper and businessman. He is one of the best-selling musicians of all time, having sold more than 100 million records, while receiving 21 Grammy Awards for his music. MTV ranked him the “Greatest MC of all time” in 2006. Rolling Stone ranked three of his albums—Reasonable Doubt (1996), The Blueprint (2001), and The Black Album (2003)—among The 500 Greatest Albums of All Time. In 2017, Forbes estimated his net worth at $810 million, making him the second-richest hip hop artist in the U.S. Jay-Z owns the New York 40/40 Club sports bar, and is the co-creator of the clothing line Rocawear. He is the former president of Def Jam Recordings, co-founder of Roc-A-Fella Records, and the founder of the entertainment company Roc Nation. He also founded the sports agency Roc Nation Sports and is a certified NBA and MLB sports agent. As an artist, he holds the record for most number one albums by a solo artist on the Billboard 200 with 13. He has also had four number ones on the Billboard Hot 100, one (“Empire State of Mind”) as lead artist. In 2009, he was ranked the tenth-most successful artist of the 2000s by Billboard as well as the fifth top solo male artist and fourth top rapper behind Eminem, Nelly, and 50 Cent. He was also ranked the 88th-greatest artist of all time by Rolling Stone.

Shawn Carter was born in Brooklyn, New York and was raised in Marcy Houses, a housing project in Brooklyn’s Bedford-Stuyvesant neighborhood. After their father, Adnis Reeves, abandoned the family, Shawn and his three siblings were raised by their mother, Gloria Carter. Reeves would later meet and reconcile with Jay-Z before dying in 2003. Jay-Z claims in his lyrics that in 1982 at age 12, he shot his older brother in the shoulder for stealing his jewelry. Along with future rapper AZ, Carter attended Eli Whitney High School in Brooklyn until it was closed down. He then attended the nearby George Westinghouse Career and Technical Education High School with future rappers The Notorious B.I.G. and Busta Rhymes, followed by a stint at Trenton Central High School in Trenton, New Jersey, though he did not graduate. Based on his interviews and lyrics, during this period he sold cocaine and was shot at three times.

According to his mother, Carter used to wake up his siblings at night banging out drum patterns on the kitchen table. She bought him a boom box for his birthday, sparking his interest in music. He began freestyling and writing lyrics. Known as “Jazzy” around the neighborhood, Carter later adopted the showbiz/stage name “Jay-Z” in homage to his mentor Jaz-O.

In 2002, Jay-Z and Beyoncé collaborated for the song “’03 Bonnie & Clyde”. Jay-Z also appeared on Beyoncé’s hit single “Crazy in Love” as well as “That’s How You Like It” from her debut album Dangerously in Love. On her second album, B’Day, he made appearances on the 2006 hits, “Déjà Vu” and “Upgrade U”. In the video for the latter song, she comically imitates his appearance. The couple generally avoids discussing their relationship. Beyoncé has stated that she believes that not publicly discussing their relationship has helped them. Jay Z said in a People article, “We don’t play with our relationship.” They kept a low profile while dating, and married in April 2008. It became a matter of public record on April 22, 2008. Beyoncé and Jay-Z were listed as the most powerful couple for TIME magazine’s 100 most influential people of 2006. In January 2009, Forbes ranked them as Hollywood’s top-earning couple, with a combined total of $162 million. They made it to the top of the list the following year, with a combined total of $122 million between June 2008 and June 2009.

At the 2011 MTV Video Music Awards, Beyoncé revealed that she was pregnant with their first child and on January 7, 2012 she gave birth to their daughter, Blue Ivy Carter. On January 9, 2012, Jay-Z released “Glory”, a song dedicated to their child, on his social website LifeandTimes.com. The song detailed the couple’s pregnancy struggles, including a miscarriage Beyoncé suffered before becoming pregnant with their daughter. Because Blue’s cries were included at the end of the song and she was officially credited on the song as “B.I.C”, at two days old she became the youngest person ever to appear on a Billboard chart when “Glory” debuted on Hot R&B/Hip-Hop Songs at number 74. On June 18, 2017, Beyoncé’s father Mathew Knowles confirmed that she had given birth to twins with Jay-Z.

In early June 2017, posters were displayed in New York City and Los Angeles, as well as banner ads on the Internet promoting a TIDAL-related project titled 4:44. A teaser ad was aired during the NBA Finals on June 7 featuring actors Mahershala Ali, Lupita Nyong’o and Danny Glover in a one-minute video, ending in “4:44 – 6.30.17, Exclusively on Tidal”. On June 18, the project was confirmed to be a new Jay-Z album, and a clip featuring a song titled “Adnis” was posted on Sprint’s YouTube page.

Please pray for Jay-Z and his family. Pray that The Lord uses the influence gifted to their family to bring more unity and joy to their fans. Pray that their creative home is filled with joy. Also, pray that The Lord molds the heart of Jay-Z, so all of his actions, creative works and business ventures are for the advancement of the kingdom. Join HPN as we lift Jay-Z up this week.