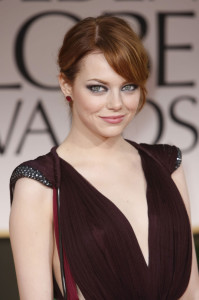 Emily Jean Stone was born in Scottsdale, Arizona, to Jeff Stone, contracting company founder and CEO, and Krista, a homemaker.Stone attended Sequoya Elementary School and Cocopah Middle School but then went on to be homeschooled for two years. During that time, she appeared in sixteen productions at Valley Youth Theatre, including The Princess and the Pea, Alice in Wonderland, and Joseph and the Amazing Technicolor Dreamcoat, and performed with the theater’s improv comedy troupe. Her parents also sent her for private lessons with a local acting coach who had worked at the William Morris Agency in the 1970s. Stone later attended the Xavier College preparatory, an all-girl Catholic high school, although she was raised as a Lutheran. In 2004, at the age of fifteen, she convincingly asked her parents to move to California to pursue a career in acting, and she moved to Los Angeles with her mother.

She had her TV breakthrough when she won the part of Laurie Partridge in the VH1 talent/reality show In Search of the Partridge Family which led to a number of small TV roles in the following years. Her movie debut was as Jules in Superbad (2007) and, after a string of successful performances, her leading role as Olive in Easy A (2010) established her as a star. This role got her a Golden Globe nomination for best actress in a comedy or musical. Stone then went on to work on Friends With Benefits, Crazy, Stupid, Love & the Oscar nominated The Help. More recently, she plays comic book character Gwen Stacy in The Amazing Spiderman 1 & 2. Her upcoming work include film projects by James Cameron & Woody Allen. She is also a model for the Revlon brand along with other famous actresses including Halle Berry and Olivia Wilde. Click here for more of Emma’s bio.

Please lift up Emma in prayer, that God would work in mighty ways in her daily life on movie sets and on the public eye. Please pray that she would come to know God more personally and she would be an influence in Hollywood for His glory!