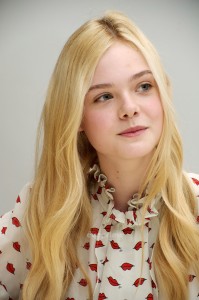 Mary Elle Fanning was born in Conyers, Georgia on April 9, 1998, the daughter of Heather Joy, who played tennis professionally, and Steven J. Fanning, who played for the St. Louis Cardinals and now works as an electronics salesman in Los Angeles. Fanning is the younger sister of Dakota Fanning, who is also an actress. Fanning and her family are members of the Southern Baptist Convention. Fanning currently attends Campbell Hall School in North Hollywood, Los Angeles.

Her step into stardom was when she was almost 3 years old when she played the younger version of her sister, Dakota Fanning, in the blockbuster I Am Sam (2001), as Lucy. She then played younger Dakota again in Taken (2002) as Allie, age 3. But her first big independent movie without her sister was in 2003’s Daddy Day Care (2003) as Jamie. She has become a successful young actress starring in Sofia Coppola‘s 2010 film, Somewhere, JJ Abrams’ Super 8, and in the recently-released Maleficent. To read more of Elle’s bio, click here!