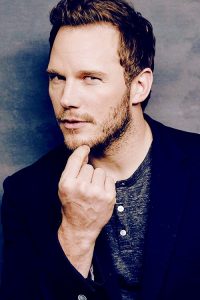 Chris Pratt was born in 1979 in Minnesota, and soon after moved to Washington. In high school he did wrestling, and remarked to his coach that he knew he’d be famous someday.

Soon after starting community college, Pratt dropped out. For a while, he worked as a ticket salesman as well as a stripper. After this, he ended up being homeless in Maui, Hawaii, spending nights in a van and a tent. In Maui, at age 19, he was discovered by actress and director Rae Dawn Chong, who cast him in her short horror film Cursed Part 3.

In 2009, Pratt began his role as Andy Dwyer in Parks and Recreation. He played Scott Hatteberg in Moneyball in 2011, which was a new kind of role for him – dramatic and mature, contrary to his previous characters which were often more youthful. He portrayed a Navy SEAL in Zero Dark Thirty (2012) and also had a role in Her (2013).

In 2014, Pratt began to make his name as a leading actor. He first headlined The Lego Movie, and later that year starred in Guardians of the Galaxy. He also played the lead role of Owen Grady in Jurassic World (2015), and will reprise that role in Jurassic World: Fallen Kingdom (2018). Pratt starred as Josh Farraday in the 2016 remake of The Magnificent Seven. Also in 2016, he co-starred alongside Jennifer Lawrence in Passengers. Recently, Pratt reprised his role in Guardians of the Galaxy Vol. 2 (2017), and will again play the same role in Avengers: Infinity War (2018). In April 2017, he received a star on the Hollywood Walk of Fame.

Chris Pratt is publicly known as a Christian, and has discussed his faith many times in the media. While living in Hawaii, a man approached him and invited him to church; soon after this, Pratt became Christian. Others have commented that he is casual about his faith, and isn’t afraid of talking about being Christian or praying for and with people, including non-believers.

In August, Chris Pratt and Anna Faris – married for eight years – announced their legal separation. Their separation was widely discussed by the news and social media, and continues to draw attention (such as when Anna Faris appeared without Pratt at the Emmys). The couple also received public comment and criticism from specifically Christian sources.

This week, let us lift up Chris Pratt in our prayers together. Let’s pray for God to restore their relationship with Himself at the center of it. Pray for their young son Jack, and that God will take away any of the weight Jack might bear as an outcome of the separation. Let’s also pray that the news and social media will respond with compassion, and that other public Christian voices speak out with love and not condemnation. In the midst of the difficulties of the separation, pray that Chris Pratt can continue to seek the Lord daily and bring the light and love of God everywhere he goes and works.