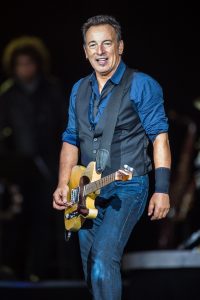 Bruce Springsteen is an American singer-songwriter. He is known for his work with the E Street Band. His work has included commercial rock albums and folk-oriented music. Springsteen has sold more than 120 million records, and has received many awards including 20 Grammy Awards. In 2009, he was a Kennedy Center Honors recipient and was awarded the Presidential Medal of Freedom in 2016.

Springsteen was born in New Jersey in 1949. He attended a Catholic school, and has said that although he was at odds with the structures of the school, his Catholic upbringing had a larger influence than anything else on his music.

Springsteen grew up hearing Frank Sinatra on the radio, as well as Elvis Presley and The Beatles on The Ed Sullivan Show. In 1964, he bought his first guitar. Throughout the late 1960s and early 1970s, Springsteen performed with young bands and trios, playing gigs in clubs and venues in several cities around the country.

In 1972 Springsteen was signed to Columbia Records. He released his debut album in January 1973, Greetings from Ashbury Park, N.J. Just months later, in September 1973, he released his second album, The Wild, the Innocent & the E Street Shuffle. Both of these albums received critical acclaim but had low sales.

In 1975, Springsteen and the E Street Band had their breakthrough at a 10-show stand in New York. Nearly ten years later, he released what is now one of the best-selling albums of all time: Born in the U.S.A. (1984). This period of time was when Springsteen was most highly visible in pop culture and reached a very broad audience.

Springsteen continued to release music in the 1990s, after moving to Los Angeles (which had caused concerns for his fans that he would change as a musician). He released Human Touch and Lucky Town at the same time. In 1999, he was inducted into the Rock and Roll Hall of Fame.

During the early 2000s, following his Reunion Tour with the E Street Band and the band’s first studio album in many years – The Rising (2002) – Springsteen experienced a return to success. He and the band released more albums over the next few years and continued to tour and perform. In 2009, Springsteen performed at the Super Bowl halftime show.

Springsteen and the E Street Band have continued to perform and release albums through 2015. This fall, Springsteen is performing a run on Broadway, which began this week. Read more about Springsteen on Broadway here.

In his autobiography, Springsteen wrote that he has “a personal relationship with Jesus. I believe in his power to save, love…but not to damn.” Referring to his Catholic faith, he has said “I don’t participate in my religion but I know somewhere…deep inside…I’m still on the team.”

This week, join us in praying for Bruce Springsteen. Pray that God will draw near to him and he will experience the presence, love, and closeness of God. Pray for his strength and health during his Broadway show performance. Let’s pray that God will use his previous knowledge and experience of Jesus to inspire curiosity in him to explore more about God.