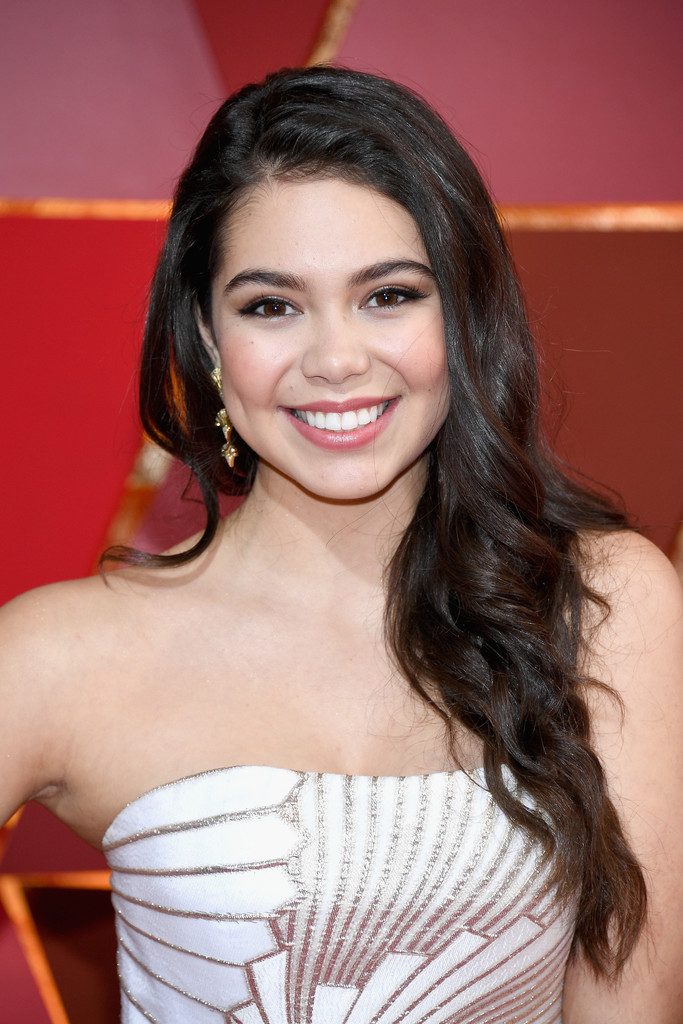 Auli’i Cravalho is an American actress, voice actress, and singer. She was born in Kohala, Hawaii in 2000 and is 17 years old.

Cravalho made her debut as Moana in the 2016 Disney film (for which she was cast at age 14). She quickly rose to fame thanks to her newly-discovered talent in voice acting and singing. Cravalho (and her voice) have become recognizable to countless children around the world, and she has also arguably become a role model for children and teens in the process.

In February 2017, shortly before her live performance at the Oscars ceremony, Cravalho auditioned for and was cast on the NBC drama Rise. The series premiered on March 13, 2018 and is her first live action role.

In reference to what her next steps will be, Cravalho said “I think I’ve been looking back so much, but I haven’t really looked forward. I’ve realized, my gosh, I was just a freshman in high school and then all of this happened. I’ve missed dances at my school, and I’ve missed assemblies, and I feel like I’ve grown up so much. I’m grateful for everything that has come to me, and I realize the only thing that has really been steady is my mom, and my appreciation for every role that I’ve been given — and I’ve worked hard for it. But I don’t know where I want to go. I want to be happy, and whether that keeps me in this industry or not, I just really want that to be my goal” (Hollywood Reporter).

Cravalho is on HPN’s Kids and Teens Prayer Calendar for March 2018, and one of the prayers on the calendar is “for child and teen actors to stay grounded and develop wisdom.” We pray this for Auli’i Cravalho, especially considering her recent and quick rise to notoriety. With her increased maturity as she continues work in Hollywood, we ask God to give her wisdom and discernment as she chooses her next projects. We pray that she (as well as her management and her family) can be selective with what she participates in, and that nothing she works on will have a negative or damaging effect on her.

We pray that Auli’i will experience the love of God, perhaps even through someone else in the entertainment industry that she works with. We pray especially for coverage of her in the media as her show Rise gains traction, and for responses to her on social media, and that none of it will be invasive, damaging, dehumanizing, or hurtful. We pray for protection over her, and that even if negative words are directed towards her in the media, she will not ever see or hear them. Pray that her relationship with her mom is loving and that her mom is patient, supportive, protecting, and continues to provide a sense of stability for Auli’i.