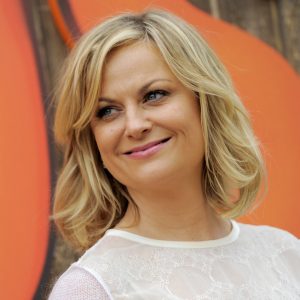 Amy Meredith Poehler is an American actress, comedian, director, producer, and writer. After studying improv at Chicago’s Second City and ImprovOlympic in the early 1990s, she went to New York City in 1996 to become part of the improvisational comedy troupe Upright Citizens Brigade. The group’s act became a half-hour sketch comedy series on Comedy Central in 1998. Along with other members of the comedy group, Poehler was a founder of the Upright Citizens Brigade Theatre.

She is best known for starring as Leslie Knope in the NBC sitcom Parks and Recreation, for which she won a Golden Globe Award for Best Actress in a Television Musical or Comedy Series in 2014 and a Critics’ Choice Award for Best Actress in a Comedy Series in 2012. Poehler was a cast member on the NBC television series Saturday Night Live from 2001 to 2008 and became co-anchor of SNL’s Weekend Update in 2004 alongside friend and colleague Tina Fey. She is also known for voicing Joy from Inside Out, Sally O’Malley from the Horton Hears a Who! movie adaption, Bessie Higgenbottom in the 2008–2011 Nickelodeon series, The Mighty B! and Homily Clock from the American-English dub of The Secret World of Arrietty.

In 2011, Poehler was included on TIME’s “100 most influential people in the world”. She also delivered the Class Day address to Harvard University’s class of 2011.

Poehler and Fey hosted the Golden Globe Awards ceremony for the first time in 2013. Their inaugural appearance garnered attention due to a joke directed at Taylor Swift, who later responded with a Madeleine Albright quote: “There’s a special place in hell for women who don’t help other women.” Poehler’s response to Swift’s comment, made as part of a Vanity Fair interview, was humorous, agreeing that she will go to hell, but for “other reasons”.

Poehler hosted the Golden Globes ceremony with Fey again in 2014 as part of a three-year contract. Gilbert Cruz, of the Vulture website, wrote: “They killed it last year with their opening monologue and they did so again this year.”

Poehler’s memoir, Yes Please, was published on October 28, 2014. She explained in a promotional interview with National Public Radio (NPR) that she was “used to writing in characters and not really writing about myself … it was easier to share the early parts of my life rather than my own current events.” Topics covered in the book include body image, parenthood, and learning about the limitations of physical appearance.

Poehler and Fey hosted the Golden Globe Awards ceremony for the third successive time in 2015, confirming prior to the event that the third time would be their last. Rolling Stone magazine wrote afterward that the pair “left no superstar unscathed during their riotous opening monologue,” in which they “casually roasted the assembled masses”. The Interview (2014), Bill Cosby and Steve Carell were among the numerous subjects covered in the routine.

Poehler served as an executive producer on the Swedish-American sitcom Welcome to Sweden, along with her brother Greg Poehler. The series aired on NBC. She is also an executive producer on Broad City which airs on Comedy Central, and appeared in the season one finale. Since August 2015, she has served as an executive producer on the Hulu original series Difficult People, which stars her former Parks and Recreation co-star Billy Eichner and comedian Julie Klausner, the latter of whom is the creator of the show. In December 2015, Poehler received a star on the Hollywood Walk of Fame for her contributions in television. An 18-time Primetime Emmy Award nominee, she won the 2016 Primetime Emmy Award for Outstanding Guest Actress in a Comedy Series for Saturday Night Live.

As of 2017, Poehler is a member of the Academy of Motion Picture Arts and Sciences.

Please pray for Amy this week as she will be in media attention due The House, her latests film,  being released. Ask for God to protect her family as we pray this week that God will work mightily in her life and reveal that his truest peace will only come from a relationship with Jesus Christ!