By adminApril 28, 2014September 25th, 2018Past Events
No Comments
This Thursday, May 1st is the National Day of Prayer in America and the Hollywood Prayer Network is gathering the entertainment community to come together on Soundstage 2 at CBS Television, Studio City, from 7:30 – 9:30pm to pray, worship and celebrate our nation, our state, our city, our churches, and the entertainment industry in a night of unity!

“Everyone is LA is welcome,” says Karen Covell, Founding Director of the Hollywood Prayer Network. “This is our 21st year of celebrating the National Day of Prayer in our community and we have a great time asking God to bless our people, regardless of their own personal beliefs or backgrounds.  We want to see more unity amongst all people in our city and entertainment industry and this Thursday we’re asking God to do that!”

Tracy Thomas Band will be leading the musical portion of the night. Tracy Thomas is an LA based worship leader, Christian Rock singer-songwriter, and recording artist. She released her debut worship album, “Before the Dawn,” in LA in 2010, and will be releasing her 2nd album this Fall. She currently leads worship regularly at Fusion As1, Ascend Malibu Fellowship, Expression58, and PIHOP. She also leads worship for conferences and Christian gatherings throughout California, as well as in parts of Canada and Europe. Along with her band, the Tracy Thomas Band, Tracy has been a part of pioneering a new wave of outreaches in nightclubs, and they have played their original worship songs at several night clubs in LA, including Whisky A Go Go, Viper Room, House of Blues Sunset, Troubadour, Hard Rock Cafe Hollywood, Key Club, Knitting Factory, among others. In addition, Tracy currently fronts the Christian hard rock band, Doma Carta, which will also be releasing an album this Fall. Tracy’s passion in leading worship is for people to have a deep encounter with the Father’s amazing love, and to draw people into the most intimate places with the Lord. For more info go to: www.tracythomasband.com.

If you would like to join the gathering, just show up at CBS Television at 4024 Radford Ave., in Studio City and ask to go to Stage #2.  You can’t miss it.  For on-line information click on: http://hollywoodprayernetwork.org/wordpress/national-day-of-prayer-may-1st/For more information contact Veronica Garcia – (323) 462-8486 ext. 2 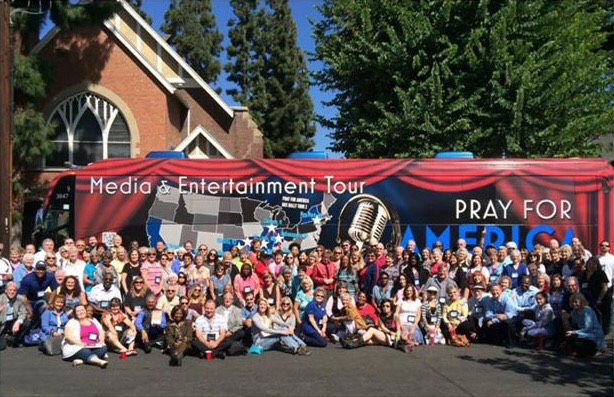