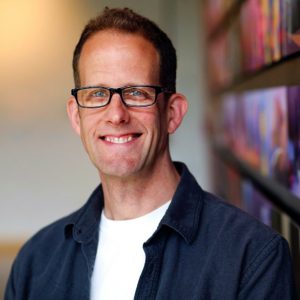 Peter Hans Docter (born October 9, 1968) is an American film director, animator, screenwriter, producer, voice actor and chief creative officer of Pixar Animation Studios. He is best known for directing the animated feature films Monsters, Inc. (2001), Up (2009) and Inside Out (2015) and as a key figure and collaborator at Pixar Animation Studios. He has been nominated for eight Oscars (two wins thus far for Up and Inside Out – Best Animated Feature), seven Annie Awards (winning five), a BAFTA Children’s Film Award (which he won), and a Hochi Film Award (which he won).

Before joining Pixar, Docter had created three non-computer animations, “Next Door”, “Palm Springs”, and “Winter”. All three shorts were later preserved by the Academy Film Archive. He was a fan of the company’s early short films, but he knew nothing about them otherwise. He commented in an October 2009 interview, “Looking back, I kind of go, what was I thinking?”

He started at Pixar in 1990 at the age of 21, and began work the day after his college graduation, as the tenth employee at the company’s animation group, and its third animator. He first met owner Steve Jobs when Jobs came to lay off some older workers. Docter instantly felt at home in the tight-knit atmosphere of the company. He has said, “Growing up… a lot of us felt we were the only person in the world who had this weird obsession with animation. Coming to Pixar you feel like, ‘Oh! There are others!'”

Docter had been brought in with limited responsibilities, but John Lasseter quickly assigned him larger and larger roles in writing, animation, sound recording, and orchestra scoring. He was one of the three key screenwriters behind the concept of Toy Story.

Docter has been an integral part of some of Pixar’s most seminal works, including Toy Story, Toy Story 2, A Bug’s Life and Monsters, Inc., all of which received critical acclaim and honors. He contributed to these animated films as a co-author to the scripts, and worked with CGI stalwarts such as John Lasseter, Ronnie Del Carmen, Bob Peterson, Andrew Stanton, Brad Bird, and Joe Ranft. In 2004, he was asked by John Lasseter to direct the English translation of Howl’s Moving Castle. Docter made his directorial debut with Monsters, Inc., which occurred right after the birth of his first child, Nick. Docter then directed the 2009 film Up, released on May 29, 2009.

In May 2009, Docter remarked retrospectively to Christianity Today that he had lived “a blessed life” so far. He has been nominated for eight Oscars (winning two), three Annie Awards (winning two), a British Academy Children’s Award (which he won), and a Hochi Film Award (which he won). He also won a Bafta for best animation for Up. Accepting his Academy Award for Best Animated Feature, he said, “Never did I dream that making a flip book out of my third-grade math book would lead to this.” Docter served as Vice-president of Creativity at Pixar Animation Studios through June 2018, and following Lasseter’s step-down from the role, is the studio’s chief creative officer (read more about the change here).

Docter is also a devout Christian. Though he incorporates his personal morality into his work, he has said that he does not intend to ever make a movie with an explicitly religious message. About the relationship between his faith and his filmmaking, Docter has said:

“I don’t think people in any way, shape, or form like to be lectured to. When people go to a movie, they want to see some sort of experience of themselves on the screen. They don’t come to be taught. So in that sense, and in terms of any sort of beliefs, I don’t want to feel as though I’m ever lecturing or putting an agenda forth.” [quote from Christianity Today]

Pray with us for Pete Docter, especially as he takes on his new role at Pixar. Ask God to be near him during this time of transition, and pray that it will go smoothly for Pete and his family. We pray that Pete’s relationship with God will grow deeper every single day, and that God continues to equip him to live and work in a way that glorifies God. Pray that Pete’s employees and coworkers would see Jesus through him and the way he lives. We praise God for the success and wide audience of Pete’s work, and we pray that everyone who sees his films will also see God in the characters, stories, and themes.