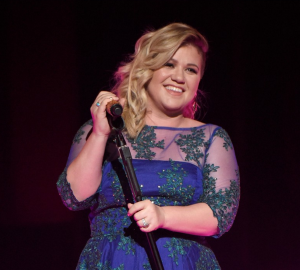 Kelly Brianne Clarkson (born April 24, 1982) is an American singer and songwriter. She rose to fame in 2002 after winning the inaugural season of the television series American Idol, which earned her a record deal with RCA Records. Clarkson’s debut single, “A Moment Like This”, topped the US Billboard Hot 100 chart and became the country’s best-selling single of 2002. It was followed by the release of her debut album, Thankful (2003), which debuted atop the US Billboard 200. Trying to reinvent her image, Clarkson decided to part ways with Idol management and her second album, Breakaway (2004), featured a pop rock sound. It sold over 12 million copies worldwide and earned Clarkson two Grammy Awards.

She took further creative control for her third album, My December (2007), co-writing the entire album. However, her label was dissatisfied with the direction of the music and reluctantly promoted the album, which became her least commercially successful release. Clarkson returned to the top of the charts with her more mainstream-oriented fourth album, All I Ever Wanted (2009). Its lead single, “My Life Would Suck Without You”, holds the record for the biggest jump to number one on the Hot 100 chart. Her fifth studio album, Stronger (2011), made Clarkson the first artist to win the Grammy Award for Best Pop Vocal Album twice. It spawned her third Hot 100 number-one single “Stronger (What Doesn’t Kill You)”. She became the first American female artist to achieve the best-selling holiday album of the year with Wrapped in Red (2013). Following the release of her third number-one album Piece by Piece (2015), Clarkson concluded her contract with RCA Records and signed with Atlantic Records in 2016. Her soul-influenced eighth album, Meaning of Life (2017), debuted at number two on the Billboard 200.

Clarkson has sold over 25 million albums and 45 million singles worldwide. She also scored a total of over 100 number ones on the Billboard charts. Her accolades include three Grammy Awards, three MTV Video Music Awards, four American Music Awards, and two Academy of Country Music Awards. Billboard hailed Clarkson as “one of pop music’s greatest singers” and honored her with the Powerhouse Award for her vocals. Known as a versatile singer, Clarkson became the first artist in history to top each of Billboard‘s pop, adult contemporary, adult pop, country and dance charts. She was ranked nineteenth on VH1’s list of 100 Greatest Women in Music. Clarkson has also ventured into film, television, and writing children’s books. She currently serves as a coach on the television competition series The Voice.

It was recently announced that one of Clarkson’s upcoming projects is the starring role in the animated feature Uglydolls. She will voice the lead character and will also perform original songs in the film, which releases May 2019. Clarkson will also return to the judging panel of NBC’s The Voice for its 15th season this fall.

Pray with us for Kelly Clarkson and that God will draw near to her. We pray that in all her current and upcoming projects, her relationships with everyone involved will be healthy and they will enjoy working with each other. Kelly was raised with Christian roots, and though we don’t know her relationship with God now, we ask that God makes himself known to her in the coming weeks and in all aspects of her life. We pray for her family and personal life and ask God to give her patience, strength, and compassion as a mother and a wife. Pray also that God provides the time and desire in her life to rest and rejuvenate, and that in those times she knows God is the source of her peace.