Lanie has been serving the Lord in intercession, including for Hollywood, since 1999 and recently became a chapter director with HPN in March of 2022!

Growing up, her dad was a pastor, but in her teens she got pulled into the ways of the world. In her thirties, after watching “Stigmata”, she devoted her life to Jesus and has not turned back! In 2018, she was diagnosed with cancer and was told that she only had months to live, but she sees her life as a living example of Psalm 23 in God’s faithfulness to be with us at all times as our Rock! She is joyfully a wife, mother and grandmother.

She looks forward to gathering people together in person for prayer and sharing prayer requests online with her chapter. She has a heart for entertainers to know God, and through knowing Him, to be a part of what God is doing in Hollywood! 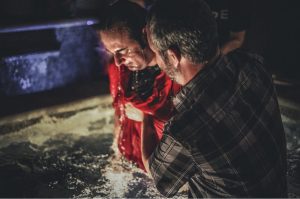 On Good Friday night April 15, almost 50 people gathered in the backyard of HPN founder Karen Covell’s house, for a beautiful night of worship, prayer, fellowship, and communion with the Lord. After a time of worship, and scripture reading, we all took communion as a group, and were encouraged to receive all that Jesus died and paid for.  Following that, everyone gathered around the hot tub to watch a beautiful and momentous baptism for new Christian and HPN community member. Everyone rejoiced as we witnessed this important step in the life of a new believer, and we also celebrated a new believer coming into the kingdom that night! 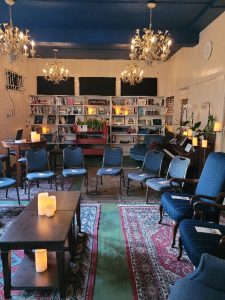 On the evening of April 12, during holy week, HPN hosted a beautiful time of contemplative and listening prayer, led by Jenny moon. We had 15 guests who spent two hours in the presence of the Lord, listening, and praying. It was a wonderful time of communion and community, and all who attended were blessed and refreshed as we enjoyed Coco and Sweet treats following the time of prayer!

Each month, HPN close a group of friends, old and new, most of whom have been introduced to HPN in the previous few weeks! At these gatherings, we have coffee and snacks, conversation, share our stories and how God brought us to LA. We also have powerful times as everyone receives prayer. We have regularly seen new friendships, collaborations, and projects come out of these intimate but awesome gatherings! If you want to meet Karen and Kelry, learn more about HPN, and get plugged in, Meetups are the place to be!

This month, we had 9 new faces – all of which are now making new friends!

Michael Blanton, of Brentwood, Tennessee, has had a celebrated career in the music industry and continues to be involved in several areas of IP development and branding. A native of Amarillo, Texas, Blanton got his start in music as an A&R representative at Word Records in Waco, Texas, moving to Nashville in 1978 to open the company’s office on Music Row. He and business partner Dan Harrell launched Blanton/Harrell Production and Management in 1980 with Amy Grant as their first client. In 1981 with friend Brown Bannister (’75), they created Reunion Records and Reunion Publishing and soon launched the careers of artists including Michael W. Smith and Rich Mullins. Blanton served as executive producer for some of Grant’s biggest hits, including the albums Unguarded (1985), Lead Me On (1988), and the multi-platinum Heart in Motion (1992), which sold more than ten million copies and received five Pop Grammy nominations, including Album of the Year. He also executive produced hits for Smith including his debut, Michael W. Smith Project (1983) featuring the song “Friends,” The Big Picture (1986), i 2 (EYE) (1988) and Change Your World (1992). Blanton and Harrell worked with authors including Frank Peretti, helping him release his multimillion selling This Present Darkness in 1986 and Piercing the Darkness in 1989. Beginning in 1997, Blanton and Harrell served as co-presidents of Gaylord’s Idea Entertainment, leaving in 2000 and forming Blanton Harrell Cooke & Corzine in 2001. There they signed acclaimed Christian artists such as Point of Grace and Bebo Norman and Joy Williams.

In 2011, Blanton launched Be Music and Entertainment to develop and manage new artists, such as Zane Williams (’99), Dave Barnes, Ginny Owens and All Sons and Daughters. In 2018, he partnered with Vertigo Media to help with their new technology branding. Technology that connects Spotify and Apple into one artist music activation app.

Also, in 2018 Blanton partnered with Gary Glover to form a new consulting and branding team, and they have helped to launch the new on-line digital songwriting venture, called Songwriting University, where anyone around the world can co-write with Nashville songwriters. And finally in 2020 Terry Benedict (producer of Hacksaw Ridge) and Blanton have formed a new film production company named Beacon Hawk Entertainment, planning to move into production of new film projects in 2022.

Blanton and his wife, Paula, have three grown children all married and living in Nashville – Carter and Molly Blanton, Chelsea and Heath Drimmel and Boothe and Conor Farley – and six grandchildren.

On March 28th, the Day after a whirlwind Oscars weekend, 30 HPN community members gathered on the top of the Television City building, and prayed over the city. Although it was a rainy night, it was a memorable time of gathering, praying, sharing stories of what God was speaking, and impromtu worship! We experienced a powerful time of feeling God move on behalf of our city!

On March 27, we had a very memorable Oscars watch party at the first Presbyterian Church of Hollywood campus for more than 120 attendees! This event was a wonderful mix of glamour and fun as we handed out prizes for those who guessed the most correct categories, and those who guessed the least! We had food, laughs, fun and even a special prayer time for Will Smith and Chris Rock after the “slap heard around the world”.

SEE PHOTOS FROM THE EVENT

Every year, the HPN family goes to the Dolby theater the Thursday before the Academy Awards, and this year we did it again! 50 people gathered at the steps of the Dolby theater and walked the red carpet, praying for every part of the academy awards.  We were able to intercede, encourage, and evangelize to and with those that were working or walking the area!

Each month, HPN close a group of friends, old and new, most of whom have been introduced to HPN in the previous few weeks! At these gatherings, we have coffee and snacks, conversation, share our stories and how God brought us to LA. We also have powerful times as everyone receives prayer. We have regularly seen new friendships, collaborations, and projects come out of these intimate but awesome gatherings! If you want to meet Karen and Kelry, learn more about HPN, and get plugged in, Meetups are the place to be!

For many in the fashion world, similarly to the filmmaking world, there seem to be an endless barrage of the talented and not-so-talented, doing whatever it takes to “make it big”. No dreamer is too small and many vie for “the dream” for those in fashion – to create collections for fashion week, to have a self-named atelier, and to create a global and recognizable brand. For Nancy Vuu, however, this is not the story.

Nancy didn’t even begin her journey into the fashion world until she was already a mother of four children. She was thriving in a corporate job, when God called her to leave the position that had helped keep her family in a place of financial comfort through the economical ups and downs for years. However, when the Lord reminded her of her childhood dream to be a fashion designer, and asked her if she’d go where He was leading, Nancy said YES, and a door to the world of fashion was opened. Since that day, Nancy has gone with the Lord around the world, and from Vogue to the streets of LA, sharing the God-dream, and her talents, to anyone who will listen. She has expanded from Children’s headpieces and gowns to a full collection of royally inspired gowns and pieces, editorial photography, creative direction, and has even entered the film-making world.

Find out more about Nancy at her website: https://nancyvuu.com

In this interview of Hollywood Changemakers Podcast, Nancy shares her journey, her mindset, and her revelation at what it means to say YES to the God-dreams that are placed in the hearts of every person. She has often asked this question: “If everything was taken care of, and you could dream with God, what would you do?”. It’s a question that not many have been asked, and is an even harder one to answer. Come with us as we explore and challenge Christians who feel called to the fashion industry and beyond to DREAM WITH GOD!